Recently, Susanne Schuberth posted an article on her blog about the kingdom of God and how we enter it. She wrote,

“We only need His power of love and the rest will fall into its place. It is so simple, the kingdom of God: First He makes us see it and later He lets us enter. Eventually, when we have entered the Kingdom of God, He teaches all of us so that we can stop teaching each other.”

As I read her words I was stunned at the simplicity of what she wrote. The photo at the head of the article was taken by her husband. She can see this church clock from her kitchen window in Germany. She calls it her “kitchen clock.” I was curious about the time he snapped the picture — 8:22. I felt led by the Lord to look up chapter 8, verse 22 in each of the four gospels and here is what I found: 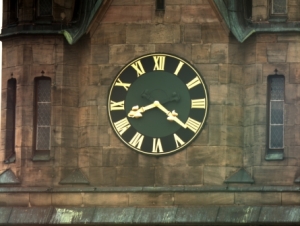 But Jesus said unto him, “Follow me; and let the dead bury their dead.” And when he was entered into a ship, his disciples followed him. (Matthew 8:22-23 KJ2000)

And he came to Bethsaida; and they brought a blind man unto him, and besought him to touch him. And he took the blind man by the hand, and led him out of the town… (Mark 8:22-23 KJ2000)

Now it came to pass on a certain day, that he went into a ship with his disciples: and he said unto them, “Let us go over to the other side of the lake”. And they launched forth. But as they sailed he fell asleep: and there came down a storm of wind on the lake; and they were filling up with water, and were in jeopardy. (Luke 8:22-23 KJ2000)

I don’t believe there is a coincidence to anything when God is teaching and leading us. Susanne’s message was all about listening, obeying God’s voice and following Him in His kingdom. Isn’t it interesting that a random picture of a clock on a cathedral could be used by the Spirit to further the lesson she shared?

In these four passages we see divine movement and progress as people followed Christ, and stagnation and death when they did not. In the Matthew and Luke passages, we see Jesus telling the disciples to follow Him and leave their attachment to the world and even their natural families behind. So as a teaching point, He told them to enter a boat and launch out across a lake. And what happened when they obeyed? Everything went well, right? No, a great storm blew up and was about to sink their boat. Jesus was asleep on a cushion in the bottom of the boat as it was starting to fill with water, ignoring their plight! Sound familiar?

Even when we obey the Lord and try to follow Him wherever He leads us, it will not be an easy road. It can even become life threatening at times. There will be many extreme tests of faith required of us. But notice Jesus’ words to them, “Let us go over to the other side of the lake.” Jesus only spoke what He heard His Father saying. Father did not say, “Let us go out into the middle of the lake and drown!” He was in perfect peace that they were going to reach the other side of the lake because that is what His Father commanded. God does not require us to do anything that He does not also give us the grace to accomplish, but there is usually a test in the process of obeying His will.

The whole boat ride was a divine setup to teach these men faith. After they woke Him up with their cries, He rebuked the storm into a flat calm and asked, “Where is your faith?” If we dare to leave all and follow Jesus, we will have our faith stretched. When this has happened, how many of us have said, “Did I hear Him correctly? I thought that if I obeyed His voice everything would be fine! But now, look at the mess He let me get into! I am not so sure I want to follow Jesus after all!” It is here that many falter. The test is too great for the depth of their commitment and they turn back. A nice spiritual boat ride on a sunny day was all they signed up for. Remember the parable of the four kinds of ground?

In the Mark passage we see Jesus take a blind man and lead him out of town so He could heal him. Again we see movement where faith is concerned. Isn’t this a curious thing? Why did Jesus have to lead him out of town so he could be made to see? Couldn’t Jesus heal him right where He stood? After seeking spiritual light, how many of us have been required to leave our comfort zones where we knew our way around (at least by feel)? God does that. He will always stir up our comfortable little lives if we are serious about following Him (see Deu. 32:10-12). Some of us had messed up lives before we realized that He was after us. He led me from the Sunday church system to go with Him outside the camp and bear the reproach that would go with it. He later gave me this passage to explain what happened.

“We have an altar, of which they have no right to eat who serve the tabernacle… Therefore Jesus also, that he might sanctify the people with his own blood, suffered outside the gate. Let us go forth therefore unto him outside the camp, bearing his reproach.” (Hebrews 13:10-13 KJ2000)

He took me outside the camps of Christendom so He could teach me how to hear His voice and give me spiritual sight. As long as I was listening to preachers that were not inspired by the Spirit in what they taught, though it was all familiar, I would rarely hear His voice and what He specifically had to say to me.

Again we see movement here in these passages. God requires progress and obedience. There is a cost attached to it, but the reward is spiritual sight. He leads us to an altar that those who insist on being taught by men have no access to. But remember, it’s when we boast and say that we see that we are blind. Humility always goes with true spiritual insight.

And finally in John 8:22, Jesus tells the religious leaders and their followers that where He goes, they cannot follow. “…you are of this world; I am not of this world.” Jesus is not of this world (He did not say earth, for the earth is the Lord’s and the fullness thereof. He said the kosmos – the world system under Satan). They were of their father the devil and destined to do his works.

If we are of Christ, we are from above, we are His sheep and we will follow the Good Shepherd wherever He goes because He loves us and we love Him. We hear His voice and will not follow the voices of strangers. As Susanne said, He leads us with His love for us. His love will never take us away from His kingdom, but always deeper into it and His heart. His love for us, as it is proven true, will always make our faith and hope in Him grow. “So faith, hope, love abide, these three; but the greatest of these is love.” (1 Corinthians 13:13 RSVA)