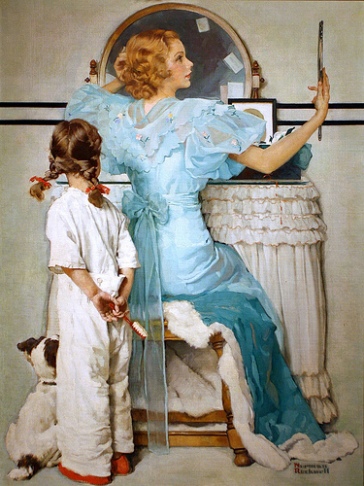 And there were certain Greeks among them that came up to worship at the feast: The same came therefore to Philip, who was of Bethsaida of Galilee, and desired of him, saying, Sir, we would see Jesus. (John 12:20-21 KJ2000)

Paul wrote, “Behold, what manner of love the Father has bestowed upon us, that we should be called the children of God: therefore the world knows us not, because it knew him not. Beloved, now are we the children of God, and it does not yet appear what we shall be: but we know that, when he shall appear, we shall be like him; for we shall see him as he is” (1John 3:2 KJ2000).

We who belong to Christ that as we continue to behold Jesus that we should become like Him. “Like” is the key word here. In Genesis God said, “Let us make man in our image and in our likeness.” The image part was almost instant, but the likeness part was an ongoing work. It required walking with God in the cool of the day and doing the works that Adam saw the Father doing and beholding Him.

There are many things that seem “godly” that capture the attention of the church today. One of the most common near misses is focusing on the church instead of Christ. We are like a woman that sits at her vanity for hours on end putting on her face and making sure every hair is in place. We tweak this and that to make sure we look the way we want to look that we might please church leadership, conform to their teachings and expectations and are pleasant to the world around us that we might convince some of “the lost” to join our religious sect and come under our influence. It is a near miss because the true church of Christ is not all about itself, but rather she is all about her Bridegroom!

A brother once told me a story about meeting a young lady at a church conference and all she could do was talk about how great her pastor was. It was “my pastor” this and “my pastor” that. Well, she finally took a breath and he asked her a couple of questions. My friend said, “I assume that you are not married, yet.” She affirmed that this was the case. He then said, “When you get married and you go down to the altar and stand by your husband and make your vows… when it is all said and done, are you going to turn around, grab the arm of the best man and head off on your honeymoon with him?” She said with great shock, “No! I will want to spend my life with and love my husband, not the best man!” To this he replied, “That is what you are doing right now by being infatuated with the pastor instead of Jesus.” We become what we behold and worship. Church leadership was never meant to take the place of Christ as our All in all, yet all too often in the lives of Christians that is exactly what happens.

I was born in the image of my father and I grew up to look like him; tall, brown hair and eyes, and even many of the same facial features. I admired him and wanted so much to be “like” him as I grew up. Soon I was smiling out of the corner of my mouth like he did, laughed like he did and even walked with a slight limp like he did (he had a wooden leg) as I beheld him. Then I discovered after coming to Christ that God had another likeness he wanted me to behold, another likeness that was far superior to that of my earthly father. It was the One he had in mind for me from the beginning that was pure and who walked in the Light of the Father from the beginning of creation. Beholding Jesus with my whole heart has brought about many changes, but it is still an ongoing process. He keeps revealing areas in my “likeness” that have not yet been conformed into the image of Christ and each time He does, I have a decision to make. Will I yield that up to Him, too? Finally at one point a few years ago, He showed me how HE saw me with all my pride that was still in tack as I was trying to be His “man of the hour” with my “spiritual gifts.” It was ugly what I saw. I cried out, “Lord if all that pride is who I still am, just kill it. Show me no mercy.” Well, that was the beginning of a deep stripping of everything I was and even things that I had. That time in the wilderness lasted for 14 years with no since of His presence in any form. It was heart-breaking and I fought being in depression continuously, but at the end of it I has come to the place where I could pray and mean it, “Father, if this state that I am in is what you have for me for the rest of my life, so be it. Not my will but yours be done.” When I quit kicking against His will, He knew that it was time to take me into a new phase where He could work with me and not constantly having me “adjust” the image of what He desired to bring forth in me. Paul said,

I beseech you therefore, brethren, by the mercies of God, that you present your bodies a living sacrifice, holy, acceptable unto God, which is your reasonable service. And be not conformed to this world: but be transformed by the renewing of your mind, that you may prove what is that good, and acceptable, and perfect, will of God. For I say, through the grace given unto me, to every man that is among you, not to think of himself more highly than he ought to think; but to think soberly, according as God has dealt to every man the measure of faith. (Romans 12:1-3, KJ2000)

He does not desire to fix up our old minds but rather replace them with the mind of Christ! The word “transformed” is metamorpho in the Greek. Like the life cycle of a butterfly, God puts us through a metamorphosis that we might become NEW creatures in Christ and the old one is done away with and discarded as useless, but what springs forth form that chrysalis is far more glorious than what went into it. First we must experience death to that old worm called Adam and then go dormant for a season (see https://awildernessvoice.wordpress.com/2013/01/18/metamorphosis/) while HE does a deep work within us so that when we come forth, there is on resemblance to that old worm, but something glorious that can take flight into the heavens with Him and see things as HE does and see HIM as HE is. Praise His name for making every provision that is needed to bring to pass in us, “when He appears we shall be like Him for we shall see Him as He is.”

For you are dead, and your life is hid with Christ in God. When Christ, who is our life, shall appear, then shall you also appear with him in glory. (Colossians 3:3-4, KJ2000)