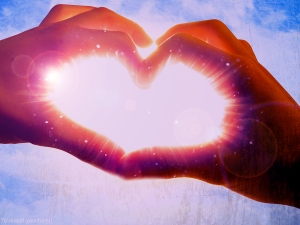 In 1 Corinthians chapter thirteen, often called “the love chapter,” Paul starts out by continuing his thoughts written in chapter twelve where he wrote much about “spiritual gifts” (tongues, interpretation of tongues, prophesy, healings, works of faith, miracles, etc.). In many church circles these have received a lot of attention, but dear saints, there is so much more! Paul goes on to write,

What if I could speak all languages of humans and of angels? If I did not love others, I would be nothing more than a noisy gong or a clanging cymbal. What if I could prophesy and understand all secrets and all knowledge? And what if I had faith that moved mountains? I would be nothing, unless I loved others. What if I gave away all that I owned and let myself be burned alive? I would gain nothing, unless I loved others. (1 Corinthians 13:1-3 CEV)

When we abide in our Father’s seventh day of rest in heavenly places (see Hebrews 4:9-11), the “then” spoken of by Paul becomes the ever-present now for the Father with whom we dwell IN Christ is the Great I AM, not the I Was or the I Will BE. In this rest the implications of the above passage from Paul are eminence! Our former state spoken of here is “when I was a child” spiritually speaking, the “when I BECAME a man” speaks of spiritual maturity in THIS life which goes on into the next. Way too much of what is ours if we abide IN Christ has been put off in our thinking as “pie in the sky, by and by.” I believe this is because of the traditions of men in the churches led by immature leaders who have yet to entire into God’s rest, but are driven by carnal human forces (see 1 Cor. 3:1-5).

Love suffers long, and is kind; love envies not; love vaunts not itself, is not puffed up, Does not behave itself rudely, seeks not her own, is not easily provoked, keeps no record of evil; Rejoices not in iniquity, but rejoices in the truth; Bears all things, believes all things, hopes all things, endures all things. Love never fails… (1 Corinthians 13:4-8 KJ2000)

Then Paul starts telling us the nature of a life living in and perfected by love saying,

“But when that which is perfect has come, that which is in part [spiritual gifts] shall be done away. When I was a child, I spoke as a child, I felt as a child, I reasoned as a child; when I became a man, I had done [away] with what belonged to the child. For we see now through a dim window obscurely, but then face to face; now I know partially, but then I shall know according as I also have been known. And now abide faith, hope, love; these three things; and the greater of these is love.” (1 Corinthians 13:10-13 Darby)

For the mature saint of God the old “now” of seeing obscurely and seeking powerful spiritual gifts — lives motivated and filtered by the lusts of that old Adam within—this kind of life is over! Our NEW life of knowing Christ and others even as WE are known by Him have now begun. What was once the “then”  becomes our ever present now! It is here that ALL things become ours as we abide IN the Vine, Jesus Christ, and He abides in us. It is here that we finally start being the womb in which true spiritual fruit of the Father can take form and be brought forth into HIS kingdom. Oh, how we long for such in-depth, abiding fellowship first with the Father and the Son and then with one another. It is here that the greatest spiritual gift of all flows freely, His great gift of pure love which shines forth His presences within and gives His life to others.

Paul went on to write about this state of being saying, “For we see now through a dim window obscurely, but then face to face; now I know partially, but then I shall know according as I also have been known. And now abide faith, hope, love; these three things; and the greater of these is love.”

The old “now” of seeing obscurely– vision filtered by that old Adam within– are over! Our NEW lives of knowing Christ even as WE are known by Him have now begun. Oh, how we long for such in depth fellowship with one another in Christ wherein the greatest spiritual gift of all flows freely, His great gift of pure love!

“Father, make is so in each of us. Do what needs to be done to bring our Old Adam to naught. Make us into your broken vessels and let the sweet perfume of your love fill the whole house wherein we dwell, the very temple of God made not with hands but by you with Living stones.”

In His agape love for you all,

Oh, the wonders of that blood,

That washes and cleanses our souls,

In His Spirit from above,

There was a time long before,

We were considered not a people,

Struggling in the house of the whore,

Those buildings with tall steeples.

With tender love Jesus found us,

Calling us unto Himself,

“Be washed in my blood you must”

And rescued us from isolation’s shelf.

Oh, the joy of fellowship divine,

We have found with Him within.

To some “intimacy” is a word to fear,

As with the Pharisees of old.

To others it is a joy so near,

These to whom He bids, “Enter bold.”

To be earthly good,” they said.

In self-righteousness they are blinded,

To these we have this to say,

“You are the ones who are binded.”

With Christ and Father we are one,

That is the eternal key.

To find most intimate love in them,

And knowing what it means to be we,

A people bound in ONE big family – intimately.

Some content on this page was disabled on August 14, 2017 as a result of a DMCA takedown notice from John Hartung. You can learn more about the DMCA here:

Continuing on the theme of God’s Light, I found this by T. Austin-Sparks that I wanted to share…

Light is transparency; light is clearness; light is absolute purity; light is honesty; light is openness of character. Light hides nothing; its whole action and nature is contrary to hiding anything. It has nothing to hide; it shows everything; it shows all: in other words, it is not deceitful. It does not want to cover anything, or to pretend or make believe that something is other than what it is. Light is single; it is not double; there is no duplicity about light. And light is just – light! There is “no darkness at all” where there is light…. How many shades and aspects of darkness there are! – a whole vocabulary of words. The Spirit has come to bring all that to an end by applying the Cross, in which it was all brought to an end in the Person of the Lord Jesus; to work out the meaning of the Cross in our lives, so that everything that belongs to that kingdom of darkness is removed: so that in the end, with us too, there is no darkness at all. Is that really what we think of, when we think of having, receiving, and being filled with the Holy Spirit? Here again, perhaps, a little re-shaping of our ideas is called for. It is true that He is many other things, as well as light: He is the Spirit of Power, He is the Spirit of Wisdom; yes, He is many other things; but, with them all, He is this. And we must not make more of those “demonstration” aspects of the Spirit, in power, in gifts and capacities, in works, than we do of His character side. If He really does His work in you and in me, He will make us to be people who can bear to be “looked into” without any fear, without any drawing of the blinds. Our lives and our motives will bear looking into.

By T. Austin-Sparks from: The Holy Spirit, the Church, and the Nations – Chapter 5