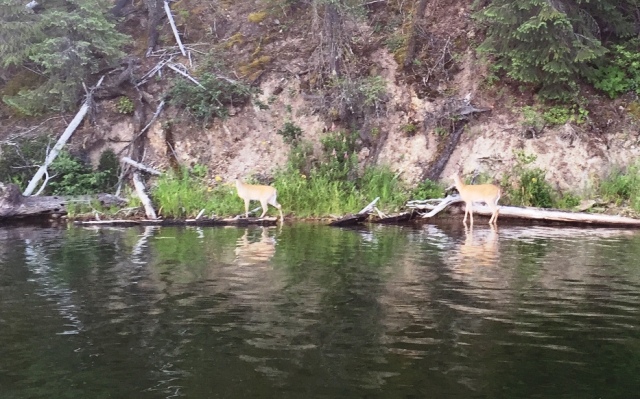 As a deer longs for flowing streams, so my soul longs for you, O God. My soul thirsts for God, for the living God. When shall I come and behold the face of God? (Ps 42:1-2, NRS)

When I look at your heavens, the work of your fingers, the moon and the stars, which you have set in place, what is man that you are mindful of him, and the son of man that you care for him? Yet you have made him a little lower than the heavenly beings and crowned him with glory and honor. You have given him dominion over the works of your hands; you have put all things under his feet, all sheep and oxen, and also the beasts of the field, the birds of the heavens, and the fish of the sea, whatever passes along the paths of the seas. (Ps 8:3-8, ESV2011)

For his invisible attributes, namely, his eternal power and divine nature, have been clearly perceived, ever since the creation of the world, in the things that have been made… (Rom 1:20, ESV2011)

Lately, I have been getting up early in the morning and taking my boat to a local lake to watch the sun rise over the nearby mountains and the foggy mist rise over the waters. Of course being a fisherman, I go prepared to catch fish, but the last couple of days I have paused from my aquatic pursuit to admire God’s handiwork in everything He created and think about Him.

This morning I saw two bald eagles, some Osprey, many small birds chasing flying insects above the water. There were also a pretty buck and doe feeding at the water’s edge. I was filled with praise for our Father as I considered all the works of His hands and thanked Him for allowing me to be part of it. Then as my heart was rejoicing over all He has created, as an added bonus He told me to look for a large dark colored creature as I entered the last bay at the end of the lake. I thought, “Oh good! I will get to see a black bear this morning!” I was looking at the far end of the bay and saw nothing. Then right near me to my right stood a young bull moose! I was only about 50 yards away from him as I rounded the corner. I only had my cell phone camera with me, so I decided to see how close I could get so I could get a good picture of him. The deer got nervous and headed up the hill when I tried to get close to them earlier, but not so with Mr. Moose. I got within 20 yards of him and he just kept eating the water lilies by the shoreline.

So, by now you are probably saying, “What does all this have to do with a spiritually inspired blog article?” Let me quote the pertinent parts of the above Psalm once again. “When I look at… the work of your fingers… what is man that you are mindful of him…You have given him dominion over the works of your hands… all sheep and oxen, and also the beasts of the field, the birds of the heavens, and the fish of the sea, whatever passes along the paths of the seas.” After my time of praise for all that my Daddy had put in place for me to see and enter into worship for Him this morning, I was feeling totally blessed. It was truly a wonderful morning to rise early, fellowship with Him, and feel the same rest that God entered into after His six days of creation were complete.

I entered into His seventh day rest and there I could feel not only His rest, but His great love and the faith of Jesus Christ working in me. Then came hope and belief that God would surely bring all good things to pass in my life even though, lately, He seems to have been taking things way more than giving.

How important it is to enter into God’s rest, dear saints, for it is here that we find all the other wonderful fruit of the Spirit working in our hearts: love, joy, peace, patience, kindness, goodness, faithfulness, gentleness and self-control. The business of this world and even religious activities can rob us of our inheritance in Christ. How important it is to get away first thing in the morning to be with God and preferably surrounded by His creation, away from the din of man-made noise, chaos and stress causing distractions.

Very early in the morning, while it was still dark, Jesus got up, left the house and went off to a solitary place, where he prayed. (Mark 1:35, NIV)

Harry Foster wrote in “A Witness and a Testimony” magazine:

As an experienced traveller he [Paul] would never find much difficulty in having his daily Scripture reading and prayer, even though he were surrounded by people. This is just a matter of practice. No servant of God, however, can exist day after day and night after night with nothing more than normal “quiet times” of reading and prayer; or if he does, his spiritual effectiveness will suffer. He must at all costs have time to think and times when he can quietly listen to God. He must be able to stand back from the swirl of activities, and the demands of preaching, interviews and consultations, so that his own spirit can he renewed and his mind adjusted.

The Lord Jesus got up very early in the morning and went out to a solitary place, or He sent His disciples ahead in a boat while He went up to spend hours of evening and night in the hills, and, like Him, Paul sent on this shipload of travellers and fellow-labourers (even the beloved Luke himself) and elected to tramp across from Troas to Assos, for twenty miles of sacred communion with God. It was both a luxury and a necessity. The action was so deliberate and significant that Luke gave it special mention in his records. Let us not, then, skip over this little incident as though it had no relevance to his apostleship. The hot springs, the shady oak glades, the splashing streams, were spiritual necessities to him, even if the literal beauties of nature had no appeal.

We long for Paul’s power and Paul’s success. We are ready, perhaps, for Paul’s sufferings. What about copying his example of getting right away with God? When did we last have a long quiet walk of communion with the Lord? When did we last move out from the companionship even of beloved brothers in Christ to listen only to Him? (*)

Wow, that stung! God has been cutting me off from writing blog posts and many other Christian activities so I would get alone with Him and find out just how wonderful and important it is to put my communion with Him first. I hope we all will learn this same lesson.

28 comments on “Solitude with Our Father”