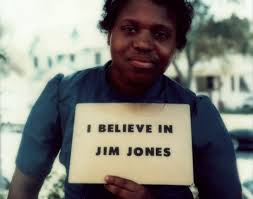 Last night I read an article about a Christian cult that my wife, Dorothy and I started to get entangled with in 1979 and ’80. Just one year earlier on November 18, 1978, over 900 people, mostly Christians died who were loyal to a pastor named Jim Jones. This man was winded and dined as a great man doing a great work for the poor by civic leaders, celebrities, senators, congressman and even President Jimmy Carter. At his prompting after a crisis in their remote compound in Guyana they all drank poisoned Kool Aid in a communion service knowing exactly what they were doing. Now that is mind control!

The Christian cult we were with was located in four different cities in the USA and we lived in one of them in the northwest. A brother in another one of these cult locations was a member for over eight years with his wife and after it was all over he said,

After reading this same article, Susanne Schuberth wrote on her blog:

“As soon as we think we have arrived at a certain point of no return in our walk with God, we can be sure that Satan will test our faith by offering us several temptations in order to draw us back into his realm of darkness where all kind of sin lurks at every corner.” https://enteringthepromisedland.wordpress.com/2015/12/22/beware-of-the-snare-in-the-air/

Some of these satanic temptations seem innocuous and even a “holy desire.” Susanne and her husband were caught up in one in Germany and my wife and I in one in Spokane, Washington. Both started out as bona fide Christian churches. Just because you go to a church the is “main line” does not mean that its leadership cannot be corrupted. You might say, “How could you be so stupid to get involved? Don’t you know your Bibles?” If you ask such a question, you have little knowledge of the power of our adversary who can come as an angel of light.

I have heard many Christians quote the tail end of this verse:

For false Christs and false prophets will arise and show great signs and wonders, so as to lead astray, if possible, even the elect. (Matthew 24:24 RSVA)

They then reason, “Well, these are The Elect! Of course it is impossible to deceive them! If so they wouldn’t be the elect!” Jesus didn’t give these warnings to the elect of God just to hear Himself talk! These deceivers are active in the Church and even have ecclesiastical titles! In Matthew chapter 24, Jesus gave many warnings as to what will come upon the earth at the end of this dispensation of grace. The New Testament has many such warnings about false anointings (Christs), false prophets, apostles and teachers sent by Satan to deceive the people of God even “with all power and signs and lying wonders.” There are many antichrists among us and have been since the end of the first century (see 1 John chapter 2).

My wife and I knew the people in our cult group quite well. We had been in the same church with them and I knew some of them from a former Christian cult in the same area that formed out of the Jesus Movement ten years earlier. This new one was called “The No Name Fellowship” by the media because they refused to take a name.

The leadership started out all warm and fuzzy as the pastor of our church invited their speakers in to minister to the congregation on Sundays. There was a lot of preaching about going all the way with God, rooting out all sin in our lives and “being holy.” Soon these cult leaders started drawing away church members by inviting them to “special meetings” for those who “really want to get serious with God.” My wife and I were serious about our faith and wanted to grow in Christ so we started going to these meetings during the week. Even the pastor and his wife were sucked into the preaching of these men and hosted them in their home for many months. During these meetings there was always a time of prayer in which the leaders encouraged the people to pray out loud what was really on their hearts. We noticed that the leader didn’t kneel and close his eyes like everyone else during prayer times, but was looking around and took note who was praying aloud and what they were saying. This sowed the seeds of doubt in us, especially after one of them asked to come to our home for dinner. A couple days after he accepted our hospitality, we were called out in one of these meeting and rebuked for all that he found while in our home that he thought was not up to their standard of “holiness.” Needless to say, the sense of betrayal and vulnerability in us started to grow.

As these leaders got control of this core group of serious saints, the control level started ratcheting up. Women were told they must wear head coverings and dresses. Their husbands were told to take control of their wives so that they did not speak up in the meetings (unless she was a “recognized prophetess.” The pastor’s wife happened to be one!) The poor pastor didn’t know what hit him and soon his wife was approved of by them and he wasn’t! Dorothy had seen the head covering edict before, so being a rebellious type, she went to the local import markets looking for a giant sombrero to wear to meetings, but they were all out! Rats! She could have provide covering for herself and the women on each side of her!

Eventually there was a church wide meeting in which the cult leaders, after failing to take control of the church facilities from the elders, forced a division among the people and took as many as they could with them. They pronounced curses on the church grounds, the buildings, and the people who wouldn’t follow them, including a curse of barrenness on all the wombs of the women stood against them. It was the ugliest church meeting we had ever attended. Dorothy and I walked out while this would-be “prophet” cult leader was doing his cursing routine. Everyone else just sat there stunned. I was deluded up until that point because I had been saying to myself, “I can’t be deceived again, because I have already escaped form one Christian cult!” In the next couple of days, I was called into a private meeting with the cult leader, the pastor, a brother in Christ that I thought was my friend and a couple of others while they commenced to berate me for walking out. I told them that I had had all this “fun” with Christians in the past ten year that I could stand and we were heading for the back side of the wilderness and would be back in about 40 years. That was the last time I saw any of them until 20 years later.

Thank God we left when we did. Over the next eight years, the lives of those who went with these men were destroyed. Anyone who did not obey the letter of these leader’s laws was publicly ridiculed and even spanked with boards. Disruptive children were beaten. This went on for years! Women who were deemed “in rebellion” were even locked up and held prisoners in a rented home below where the pastor and his wife lived! But it finally came to a head when a ten-year-old boy who was sick with diabetes was prayed over for weeks instead of given medical attention. He went into severe weight loss and was spanked over and over for a sin he didn’t commit that was “blocking his healing.” He finally died after a severe beating by his own father, supervised by the cult leader. That was when the authorities stepped in and investigated. After a long trial the prophet-leader ended up in prison over this boy’s death, as did his father.

I have shared all this because we as God’s saints we need to learn the voice of our Lord as our One Good Shepherd and not be cowed by strong soulish people who presume to speak into our lives for God. The members of this cult were all people we knew and had a sincere faith in Christ! While in prison, the leader, a powerful man who had been a line-backer in the Cleveland Browns football team and knew how to project his soulish power, confessed that he too had been deceived into thinking that what he was doing was under the authority of God. Yes, the very elect can be deceived! I hope you who read this heed Paul’s solemn warning,

“Now these things happened to them as a warning, but they were written down for our instruction, upon whom the end of the ages has come. Therefore let any one who thinks that he stands take heed lest he fall.” (1 Corinthians 10:11-12 RSVA)

37 comments on “Deceiving the Very Elect or “Don’t Drink the Kool-Aid!””