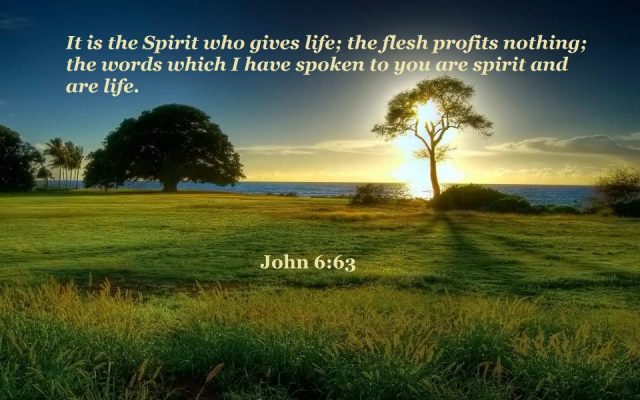 An interesting thing to watch in Christendom is the way people who want to “have a ministry” read about a great move of God, study it, then try to clone it and make it happen again with themselves at the top as the directors of this “New Move.” Some want to “get the power” of a healer like John G. Lake. They have actually laid on his grave, hoping to suck some of his anointing out of his dead body. Others study the sermons of Smith Wigglesworth, Spurgeon, or Jonathan Edwards and copy their style hoping to become “powerful preachers.” Carnal people will do anything to have heaven’s power and maintain control of their own lives and the lives of others as well. The flesh dies hard.

Earlier this year I was contacted by a person who had started a street ministry after hearing about the Jesus People Movement that took place here in the early ‘70’s. This person was interviewing all the former Jesus People they could find in the area, and was sure that they could make it happen again by cloning what the Spirit of God did among the street people and college kids back then.

Today it is common for Christians to read the Book of Acts and try and come up with a “perfect form of church” like it was in the beginning. You hear much these days about “house churches” and “home fellowships” where people meet in homes like they did in the early years of the church. I have nothing against meeting in homes with other saints. I have done it many times myself, but unless God builds the house, they who build it labor in vain. Let me say right now that you cannot clone or even guess what God does or will do next! He makes ALL things NEW (Revelation 21:5)! He is not a man with a limited imagination that He has to repeat what He did in the past as He moved His kingdom forward among men.

The hardest thing for man to do is to follow His counsel, “Be still and know that I am God” (Psalm 46:10). We still have the seed of the first temptation in us to DO something, to eat of the tree of knowledge of good and evil and be like God! The flesh of Adam that abides in an uncrucified man is totally useless. If a work is conceived and given life by God, as it totally relies on Him, He will keep it going and meet its needs. But if it is not, it will take a lot of fleshly activity and manipulation of many people to make it work at all, and it will still lack His supernatural power. The Jesus Movement was a powerful revival, but it died an early death because fleshly men took hold of it and used worldly means and human power to manipulate it. Remember Jesus’ words. In the economy of God “the flesh profits nothing.”

In closing I want to share this quote from T. A. Sparks,

I went in response to a revelation and set before them the gospel. (Galatians 2:2 NIV)

How important it is that every fresh undertaking in work for God should come by revelation to those chosen for it. Because God has so spoken and given revelation to some chosen instrument and a truly spiritual work has been done, others have taken it as a model and have sought to imitate it in other places. The result has been, and is, that they are called upon to take responsibility for it – find the resources of workers, funds and general support. This, in turn, issues in many sad and pathetic, if not evil and worldly, methods and means being employed, and those concerned find themselves in a false position. Conception, not imitation, is the Divine law of reproduction. Anointing, not human selection, is the Divine law of succession. The fact is that the work of God has become a sphere for so many natural elements to find expression and gratification. Man must do something, see something, have something. Ambition, acquisition, achievement, etc., have found their way over to Christian enterprise, and so, very often (let us be quite frank) things have become ‘ours’ – ‘our work,’ ‘our mission,’ ‘our field,’ ‘our clientele’; and jealousies, rivalries, bitterness and many other things of the flesh abound.

It is a very difficult thing, a crucifixion indeed, for the natural man to do nothing and have nothing, and especially to know nothing. But in the case of His most greatly used instruments, God has made this a very real part of their training and preparation. The utter emptying of all self-resource is the only way to have “all things of (out from) God” (2 Cor. 5:18). On this basis, even Christ elected to live. We need not remind you of Moses’ “I am not eloquent” (Exo. 4:10), and Jeremiah’s “I am a child” (Jer. 1:6), and Paul’s “that we should not trust in ourselves” (2 Cor. 1:9). These were of a school in which the great lesson of the difference between natural and spiritual was taught experimentally. (“What Is Man?” by T. A. Sparks)

28 comments on “Cloning the Moves of God”