For many years the churches in America each have had a dominate leader called pastor or priest. Back in the sixties when I started attending Protestant churches, the pastor visited the homes of the faithful, and when they were sick in the hospital, he visited them there too. But along the way men bought into the teaching of church growth, and it became more important to grow a forest and ignore the individual trees. They stopped seeing people as individuals with individual needs. The larger the institution, the more impersonal it became. The thrust was all about church growth by amassing numbers of tithing members with very little attention to their spiritual progress. Men rose up with “great swelling words” and personal charisma and many people were drawn to those churches. Church programs became focused on satisfying the flesh and there was soon a club for everybody’s personal interests–except for seeking the way of the cross that deals with all these diverse soulish interests and makes Christ our ALL in all. Thus the “seeker friendly” church was born and catering to the flesh became a common practice.

During this same period a movement to restore the “five-fold ministries” began. These leaders taught that if we could just restore the ministries spoken of in Ephesians 4:11, Jesus would be pleased and the power that the church had in its infant days 2000 years ago would be restored. This sounded logical to many of us and it was an improvement over the one-man band method of leadership that we grew up with. Using the following verse that says what these five ministries are for convinced people to jump on this band wagon.

For the perfecting of the saints, for the work of the ministry, for the edifying of the body of Christ: (Eph 4:12, KJ2000)

In theory, these five ministries would raise up all the saints to do the work of the ministry for the edifying of the church. Everybody would have a real ministry in the church and if you obeyed and brought yourself under their authority, eventually you would get to be one of the big guys, join in and play in their “reindeer games.” Who knows, you even might get a paid staff position. In reality, the available slots just kept the machine going and made sure the five-fold guys kept their positions. So as you can imagine, there were hundreds of new ministry titles not found in the Bible like parking ministry, coffee counter ministry, children’s church ministry, snow removal ministry, or church decorating ministry. You get the idea.

This shtick got old pretty quick and the enemy had to come up with a new one. Next came men who pointed at the fallacy of the former five-fold teaching. They told their prospective followers that God wanted them to raise up everyone into their own callings. They stressed how important each of person was to God. Some even went around giving people biblical sounding titles such as “the apostle over the church in Smallville,” and flattered their followers with their words, all the time never letting go of their positions as overseer of this new pyramid they were building. 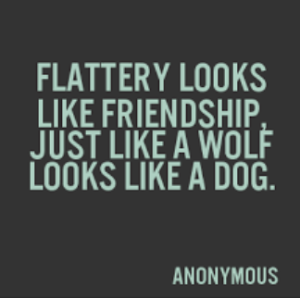 Flattery! This is the tool the enemy has used from the very beginning. The serpent used this to deceive Eve.

And the woman said to the serpent, “We may eat of the fruit of the trees in the garden, but God said, ‘You shall not eat of the fruit of the tree that is in the midst of the garden, neither shall you touch it, lest you die.’” But the serpent said to the woman, “You will not surely die. For God knows that when you eat of it your eyes will be opened, and you will be like God…” (Gen 3:2-5, ESV2011- emphasis added)

Wait a minute, aren’t we to be godly and god-like? So what is wrong with that? Didn’t God say, “Let us make man in our image, after our likeness”? And all Eve had to do was simply eat the fruit of this forbidden tree and she could be just like God. Finally, a fast track to holiness wherein she would know the difference between good and evil for herself! Who needs God, anyway.

You see, dear saints, there is no fast track. There is no holy Stratolounger for spiritual couch potatoes to lie on and get in spiritual shape. But there IS one thing that God has provided that is imperative for those who would follow Christ. It is not having a ministry given to them in the church. Jesus told us what it was, but this entitlement generation totally ignores these verses.

Then Jesus told his disciples, “If anyone would come after me, let him deny himself and take up his cross and follow me. For whoever would save his life will lose it, but whoever loses his life for my sake will find it. (Matt 16:24-25, ESV2011)

Indeed, all who desire to live a godly life in Christ Jesus will be persecuted, while evil people and impostors will go on from bad to worse, deceiving and being deceived. (2Tim 3:12-13, ESV2011)

It is much more convenient, profitable and satisfying to rise up over people with convincing lies and flattery than it is to be persecuted and rejected for telling them the truth.  Paul had the Bible knowledge, intellect, and speaking abilities to preach the gospel, but while using these natural abilities, he persecuted the Church of Christ! This is why Paul wrote to the Corinthians:

And I, when I came to you, brothers, did not come proclaiming to you the testimony of God with lofty speech or wisdom. For I decided to know nothing among you except Jesus Christ and him crucified. And I was with you in weakness and in fear and much trembling, (1Cor 2:1-3, ESV2011)

He was determined to not use his soulish intellect and flowery language to win these people by tickling their ears, much less flattery, but instead he preached the cross of Christ. He taught that we must each take up our cross and follow Jesus. He knew that our un-crucified souls are of no avail to God, and are a tool of the devil that causes division in the church. The Corinthian believes had already proven this (see 1 Cor. Ch. 3).

Today, Susanne Schuberth shared with me a very enlightening portion from T. Austin-Sparks’ writings that exposes just how Satan has tried to use flattery to deceive God’s people:

Next we come to the Gibeonites. The thing that is said about the Gibeonites, and which sums them up, is this: “They also did work wilily [with guile]…” (Joshua 9:4).  Lies, and flattery, and sentiment all working together.

Flattery! “Oh, we know that you are the Lord’s people! We know the Lord is with you! We have heard all about it! We have no doubt whatever that you are specially led of God! You are bound to succeed!”

Lies! You are familiar with the lies of the Gibeonites. They are recorded in chapter nine of the book of Joshua.

Sentiment! “Though we started out on this long journey with new wineskins, and warm bread from the oven in our bags, see how tired out we are, and how worn out these wineskins are: and all because we believe in you! We know the Lord is with you, and we appeal to your kind-heartedness!”

It is very striking that when Paul in chapter 6 of the letter to the Ephesians exhorts believers to take unto them the whole armour of God he does not say, Wherewith ye shall be able to quench all the fierce onslaughts of the Devil. You would expect him to say that, when he has told of such an equipment; a helmet of salvation, a breastplate of righteousness, a shield of faith, a girdle of truth, and a sword of the Spirit. This surely means that the Devil is coming in with fierce onslaughts. No! The Scripture is, “…that ye may be able to stand against the wiles of the devil.” All this provision of God is given to that end.

What is the object of the Devil? Arrest! And what are we to say of the alliance with the Gibeonites? Something which ought to have been slain became an institution. That peril is not so far from us as it pretends to be. The Gibeonites said to Joshua: “From a very far country thy servants are come…” when as a matter of fact they were next door neighbours. The peril is much nearer to us than perhaps we realize.

From time to time, in the face of a situation which seems to be perfectly good and right the Lord inwardly says, Be careful! Do not commit yourself to that! You will discover later on what is wrong with it! And so we do. We are in a realm where it is so necessary for us to walk in the Spirit, because only the Spirit can keep us moving on in a clear way to the fulness; for if in a case like that of the two and a half tribes, or Achan, or the Gibeonites, we come down on to the natural ground in our endeavour to deal with heavenly things, with spiritual forces, we are bound to have our course checked, and our progress toward the Divine fulness brought under arrest.

Beware of any alliance with the enemy through a lie…  (1)

Daniel the prophet saw this great delusion of Satan coming on the church in the last days when he wrote:

He shall seduce with flattery those who violate the covenant, but the people who know their God shall stand firm and take action. And the wise among the people shall make many understand, though for some days they shall stumble… When they stumble, they shall receive a little help. And many shall join themselves to them with flattery, and some of the wise shall stumble, so that they may be refined, purified, and made white, until the time of the end, for it still awaits the appointed time. (Dan 11:32-35, ESV2011 – emphasis added)

“Oh brother, you are so wise and know so much about the Bible. God has gifted you with so much, come and let me sit at your feet as your disciple.” To this I have one answer–the same one John gave the church when many anti-Christ teachers were among them.

I write these things to you about those who are trying to deceive you. But the anointing that you received from him abides in you, and you have no need that anyone should teach you. But as his anointing teaches you about everything, and is true, and is no lie—just as it has taught you, abide in him. (1John 2:26-27, ESV2011)

Our most important defense against the lies of Satan is having the Holy Spirit abiding in us and listening to HIS voice as He warns us.  Beware of flattery that appeals to your pride or soulish inclinations, dear saints. Satan is even able to make those who are wise in spiritual things to stumble over this one.