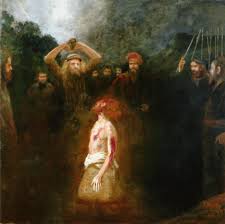 “And after six days Jesus took Peter, James, and John his brother, and brought them up into a high mountain apart, And was transfigured [Grk. metamorphoo] before them: and his face did shine as the sun, and his clothing was white as the light.” (Matthew 17:1-2 KJ2000)

What a wonderful sight that must have been for these disciples to behold Jesus in such perfection and glory. Have you ever met a dear saint who had been so changed by the living Christ abiding in them that their face shone with His glory? Is it even possible for a mere human to be so transformed by the indwelling Christ that they shine forth with His love and grace? I think that this is what Stephen’s religious persecutors saw that day as is recorded in Acts chapter seven and they broke out into a frenzied rage and gnashed on him with their teeth!

“Now the Lord is the Spirit, and where the Spirit of the Lord is, there is freedom. And we all, with unveiled face, beholding the glory of the Lord, are being changed [Grk. metamorphoo – tranfigured] into his likeness from one degree of glory to another; for this comes from the Lord who is the Spirit. Therefore, having this ministry by the mercy of God, we do not lose heart. We have renounced disgraceful, underhanded ways; we refuse to practice cunning or to tamper with God’s word, but by the open statement of the truth we would commend ourselves to every man’s conscience in the sight of God.” (2 Corinthians 3:17-4:2 RSVA)

Stephen, that day 2000 years ago, had an unveiled face… his face shown like that of an angel.  It was the face of Jesus who abode within him. And for those who were followers of Moses with their veiled faces it was too much. His face was a witness before them that what he told them was the truth… that they had slain the Lord of Glory, their Messiah, and that their temple worship was used by them to “always resist God’s Holy Spirit.”

Have you ever noticed in a church service that any time the Spirit starts to rise and the presence of the Lord is starting to become manifest, someone in control feels compelled to rise up and put an end to it? I have seen this happen over and over. The program must go on! And the Spirit wind does not abide in the walls and the programs of men. Where the Spirit of the Lord is there is freedom and the purveyors of religious bondage will not allow freedom to take hold and get out of their control so the Spirit wind moves on.

So we who have the Spirit of Christ must move on with Him. We seek HIS glory and abide in HIS life changing truth. We cannot settle for mere words that come forth from those who quench the Spirit and handle the word of God with cunning and much tampering. We would rather read the Bible for ourselves and listen for our Shepherd’s voice speaking to us in a personal way. We would rather behold HIS face than the faces of those who would presume to take His place as they stand before us on their elevated platforms.

In the above passage Paul says we who behold Jesus’ face have a ministry. We have the ministry of Life IN Christ Jesus. We are being changed, transfigured, into the likeness of the One whom we behold. We go from one degree of glory to another because this comes from the Spirit of the Lord who abides in us! As much as we are being transformed into the image of Christ is what proves that our service “ministry” is true, not some man-made title, degree or stance behind a pulpit and in this we do not lose heart for Christ is our sufficiency in all things as we abide IN Him. Behold Him, dear saints, and shine forth with what you behold.

22 comments on “Transfigured into His Likeness”